For eleven years (2000-2011), the OLA faith community and Vietnamese Community in particular, were blessed with the leadership and service of  Associate Pastor Fr. John Tran (Cong Nghi). The following was submitted by the VietCatholic Network:

It is with great sadness and heavy hearts that we announce the passing of our beloved director and colleague, the Reverend Father John Tran Cong Nghi who has battled with a heart condition and complications from a car accident. He has gone home to the Lord on April 22, 2021.

Fr. John Nghi was born March 13, 1945, in Phat Diem diocese, Ninh Binh Province, Vietnam. He attended Phat Diem Minor Seminary in Saigon and went on to Saigon Major Seminary before going to Rome for his study at Pontifical Urban University, where he was ordained a priest March 27, 1971. Fr. John Nghi also studied Social Science at Fordham University in New York and earned his Ph.D. in Theology from Pontifical Urban and Gregory universities in 1978.

In his pastoral ministry, he had served as chaplain for Fort Chaffee refugee camp when the first waves of Vietnamese refugees arrived in the U.S. after the fall of South Vietnam to communism. He also served as director of the Vietnamese Pastoral Center, New Orleans Archdiocese, Louisiana; Executive Director of Indochinese Center, Washington D.C.; Director of Southeast Asian Pastoral Center, Archdiocese of Portland, Oregon; Vice President of the Federation of Vietnamese Catholic in the US; Director of Research on Vietnamese Pastoral Needs in the United States Project in Orange County, Southern California.

He had also been assigned associated pastor of parishes such as St. Paul of the Cross, La Mirada, St. Finbar, Burbank, St. John Fisher, Rancho Palos Verdes, Our Lady of the Assumption, Claremont, and pastor of St. Catherine of Alexandria, Avalone, Catalina. All are in the Archdiocese of Los Angeles, California.

The busy schedule of pastoral ministry could not deter Fr. John Nghi from what was to be the uncharted territory of information technology in the late 1980’s and early 1990’s. He became an enthusiastic learner of IT despite his advanced age, tirelessly pursuing the goal of devoting all his spare time and energy to the love of his life: evangelization on the Internet. By the grace of God, in the mid 1990’s he met and teamed up with J.B. An Dang, an analyst programmer in the computer science field to found VietCatholic News (VCN) network, serving not only millions of Vietnamese Catholics in the diaspora but also those in Vietnam who cannot penetrate the communist firewall to fulfill their needs for news on current events, commentaries, and spiritual reflection in [light] of our Catholic traditions and values.

To the end of his life, he continued to be the driving force behind the growth and well-being of his spiritual child: VietCatholic News Network. According to “Feedspot,” as of today VCN ranks 11th among the top 100 Catholic Youtube Channels on Church, Bible, Pope, Christ and Gospel News Videos, in both Vietnamese and English.

Today Fr. John Tran Cong Nghi is no longer with us, but his legacy will live on... in the ministry of serving… those who thirst for knowledge and information that lead them closer to God... Please join with us in praying for his soul to be where he ultimately wanted to be, that is, at the side of God. 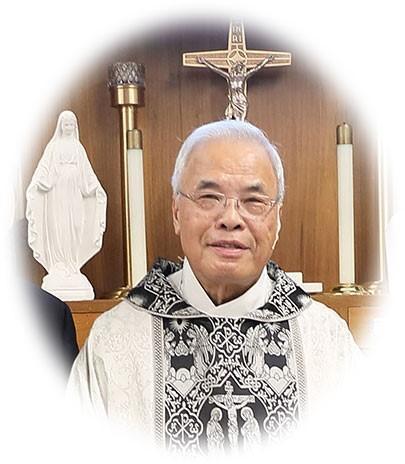