Read his 50th Anniversary Homily and view photos in the bulletin of July 29.

Only the Lord knows the real legacy of 50 years of service as a priest. A vocation is not so much a list of accomplishments as it is a continuous commitment to serve. Msgr. Tom Welbers, former pastor of OLA, was ordained April 27, 1968, at St. Vibiana’s Cathedral, Los Angeles, by Cardinal McIntyre. He graduated that year with an M.A. in religion at St. John’s Seminary where he had been  master of ceremonies for all liturgies.

His first assignment was at Our Lady of Grace Parish in Encino. From there he completed two years of study at the Pontifical Liturgical Institute in Rome (interrupted by an assignment at St. Philomeno in Carson), and then served at Our Lady of Lourdes in Northridge and Holy Name of Jesus in LA. During this time, he was a member of the Archdiocesan Liturgical Commission, wrote for The Tidings, and taught at the seminary.

Cal State Long Beach was his first assignment as a campus minister. He served as Archdiocesan Director of Campus Ministry from 1988 to 1994 before coming to OLA as pastor. He led the celebration of OLA’s 50th anniversary in 1997, and OLA School’s 50th anniversary in 2005. The fateful day of Sept. 11, 2001, came in the middle of the Parish Assessment and Renewal (PAR) that created a strategic plan and formed our leadership councils. As pastor, Father Tom strengthened liturgical planning and ministries, expanded outreach ministries, and fostered the vocations of Deacon Bob Steighner and Deacon John Tullius. He was appreciated as a good homilist and adult education teacher.

Father Tom supported the transfer of land where the old Sacred Heart Chapel had once stood to a project for Habitat for Humanity (2005). He established stewardship at OLA and continued the tradition of interfaith collaboration in the community. As a new Monsignor (2006), he led seven pilgrimages to Turkey, and joined the OLA Pilgrims to Jerusalem and Rome in 2016. His last assignment before retirement was at Good Shepherd Parish in Beverly Hills. Today he may be reached at his website at https://tomwelbers.wordpress.com/

The following is Father Tom's farewell message to the parish on June 28, 2009:

Ancient writers tell the story of John the Apostle, as an old and frail man, being carried on a stretcher into the Sunday assembly of his community at Ephesus for the celebration of the Eucharist. He was the last living eyewitness of Jesus, and the young people of the community were eager to hear stories of Jesus and final words of wisdom before he died. Week after week, all he would say to everyone, young and old, “Little children, love one another.” When the people badgered him for more, eager to hear the many things about Jesus that had to be in his memory, he simply replied, “Little children, love one another. When you have heard that, and do it, there’s nothing more you need.”

Today, as I bid farewell to you, the wonderful community of OLA, and prepare to live among a new community of faithful whom God has placed in my care, I leave you those words as my own as well. The “love” that John (and Jesus, and Paul) speaks of embraces but infinitely surpasses the idea of love expressed in the Beatles’ 1966 song, whose title I adopted above.

Jesus gave the example of love in his total other-centered self-giving in sacrifice on the cross. A true follower of Jesus can’t be satisfied with anything less. Perhaps, as you prepare to welcome your new pastor and associate pastor, Fr. Charles Ramirez and Fr. Chris Troxell, you may want to spend some time reading and reflecting and praying that wonderful hymn on the qualities of genuine love that St. Paul gives us in 1 Corinthians 15.

In 1994, when I first came to Our Lady of the Assumption as your pastor, Monsignor Bill Barry told me a story about when he first came as pastor thirty-one years earlier. He followed Fr. Don Strange, a wonderful and much-loved pastor who had built the parish community from very humble beginnings. And he was facing the same problem I was facing, following in the trail of an immensely popular pastor. When he talked to Fr. Strange about this, the older and wiser pastor simply said, “Bill, just love your people, and tell them often that you love them, and everything will fall into place. That’s all you need.” That’s why he adopted as his theme song, “You’ll Never Know Just How Much I Love You,” and would sing it whenever the occasion seemed right – which was very often.

I have tried to follow that advice as well. And now I can do no other than to leave it up to you to decide how well I did that.

And so my parting words to you, as well as my welcoming words to Fathers Charles and Chris, can only be, “Little children, love one another.”

I love you, and, as I begin to love another community, I will not stop loving you. 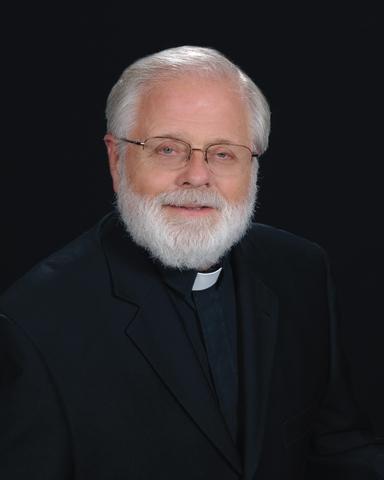 Habitat for Humanity Project
on site of Sacred Heart (2005)