By any measure, Joan Giuliano is a beautiful person. She has grown into the giving person described by Henry Nouwen as the mother of nine children, an active parishioner at OLA in many ministries, an ardent advocate of respect for life, and, most recently, co-chair of the Stewardship Committee. Joan is one of the most familiar faces around OLA as the point person for OLA for Life, gracing the patio with her presence nearly every month for many years. Her participation in today’s Parish Life Expo will be her final contribution as the official head of that ministry – she is retiring after 35 years of active ministry and looking for someone to sustain the parish effort to support respect for life in all of its facets. She calls it “educating our faith community to filter the messages coming frrom all sides and to discern the truth of the Church.” What is less known is the personal story of how she found her passion – in her fourth pregnancy, the child was found to have a genetic disorder that indicated a reason to abort. She and her husband, Vincent, decided to trust in the Lord’s way and have never regretted the decision to accept a large family. After that experience, she became an active supporter of the cause for life, even going to jail for her public witness. Joan feels that basic principles such as gratitude to God for the gift of life and all its blessings, and a deep respect for God’s commandments are best taught by example. More about OLA for Life... 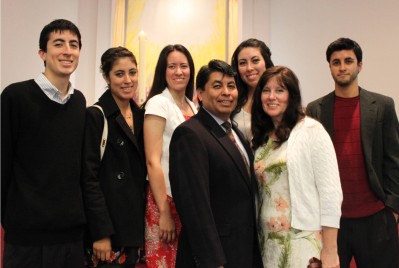 The Alvarado Family generously, although reluctantly, agreed to a photo and interview for the sake of promoting the benefits of participating more fully in parish life for all ages. The family is definitely "value added" to OLA in a variety of ways, but most especially as liturgical ministers. All of them serve as Extraordinary Ministers of the Holy Eucharist (EMHC) at Mass, and the young people have all been lectors for the Teen Mass. The young men, Kory and Vic IV, have followed their father into the Knights of Columbus organization, and Christi sings with the 11 a.m. ensemble on Sundays. The family unites to support the regular blood drives hosted by K of C as well. They all agree that age is not a limitation to involvement in the Church, and service is a chance to put their faith into action. Lauren testifies, "Choosing to be actively involved at a young age has helped me on my faith journey. Through my involvement, I have felt the Holy Spirit guide me to a deeper relationship with God." Christi recognizes the benefit of trying out a variety of ministries, and improving one's knowledge of Scripture and public speaking through service as a lector. Vic IV credits the example of his parents for the continuity of service in the family. As for the proud parents, Vic and Sherri wisely encouraged their children to become more involved as a way of keeping their interest alive in the Mass and the parish. "Realizing how easy it would be for my children to take privileges for granted, we set a high bar for involvement and 'giving back' to the community," says Vic. "Given the opportunity, they rose to the challenge and learned a lot in the process." The OLA community is very grateful that they did. 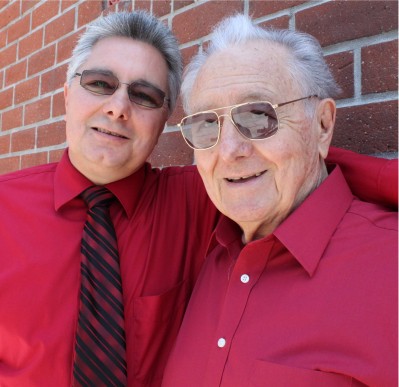 Long-time parishioner Pat Pearring (now deceased) was the embodiment of a family patriarch in modern times. What is distinctive in his legacy to his children is the dimension of faith. We honor Pat for his wholehearted commitment to the faith community at OLA, and recognize his son, Larry, for his enthusiastic embrace of this same lifestyle. Their Catholic faith has been the cornerstone of family life for Pat and his wife, Jo, since moving to Claremont in 1961. All six children were enrolled at OLA School, including the sisters, Denise, Cathy and Ann. The boys – Pat Jr., Larry and Greg – joined their father in the altar server ministry where he initiated a father-son group. And that was just the beginning!

Involved in a long list of liturgical ministries and parish organizations over 50 years, Pat was a hard act to follow. But Larry has followed in his father's footsteps as a hospitality minister, Sunday counter, and Fiesta chair with the same gusto and pride in OLA. (Both men owe a lot to their supportive and active wives/collaborators, Jo and Cathy.)

Did Pat have some wisdom to impart to OLA fathers? His philosophy included letting children be themselves and not be required to follow their parents' script, teaching children to think for themselves and be self-sufficient, and keeping an "open door" policy for sons and daughters whatever their stage in life, whether teens, young parents, or grandparents. Larry sums up his father's gift: "Dad has taught me what it means to be one of Christ's children – how to love and respect God and his children through simple acts of love and service."
NOTE: Pat Pearring went to his heavenly reward in 2012 and is considered one of OLA's many patron "saints." 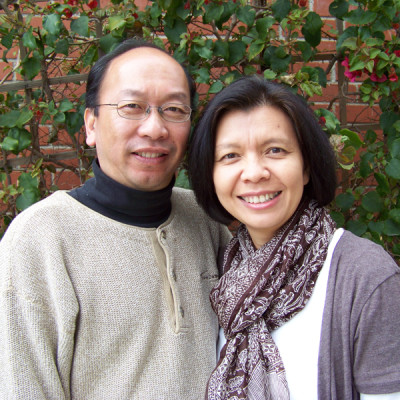 Good stewards Don and Lena Kho have provided "nourishment" of all kinds to the OLA community and beyond through their ministries. They are Eucharistic ministers at the 11 a.m. Sunday Mass, Don picks up bread donations for the poor and delivers them to a local food distribution center, Lena is past-chair of the school's annual book fair (food for the mind?), Lena nourishes the spiritual development of OLA students as the liturgy coordinator and... this couple also co-chairs the food booths at the OLA Fiesta!

A member of the parish as a teen, Don brought his family back to OLA when their son, Kevin, enrolled at OLA School. (Kevin graduated from the University of Notre Dame and went on to serve with Salesian Lay Missioners in South Sudan.) Lena served on the OLA staff for five years, with certification as a liturgy coordinator from the Loyola Marymount University program. Don is a member of the Knights of Columbus.

"We have grown spiritually through our training and ministries, and we welcome the chance to bring back what we have learned. We are always inspired by people of OLA and encourage everyone to pass on what they have received from the community," they testify. By the way, the Kho's remind all those who have enjoyed the Fiesta to pitch in with offers of help... even donations for the food booths!

Hector Cademartori, a parishioner at OLA, has enjoyed a career as an artist depicting cars and racing scenes by the hundreds. His friend and pastor, Father Charles, approached him with a vision of a new Christmas mural for the OLA sanctuary, a commission he could not refuse, although he had never before attempted to paint such a religious subject. Given this new challenge, Hector was inspired to create a non-traditional interpretation of the city of Bethlehem as the Holy Family would have seen it – dark hills, a few lights, a star illuminating the road before them leading to a rather inhospitable place. When the 9 X 12 foot mural was hung in the sanctuary of the church, Hector says he had an "overwhelming feeling" unlike any he had experienced in his 40 years as an artist: "With the little talent I had, I felt I had created something of greater value, something of a higher, more spiritual level." He was brought to tears on Christmas Day. The OLA faith community was equally moved by the painting. 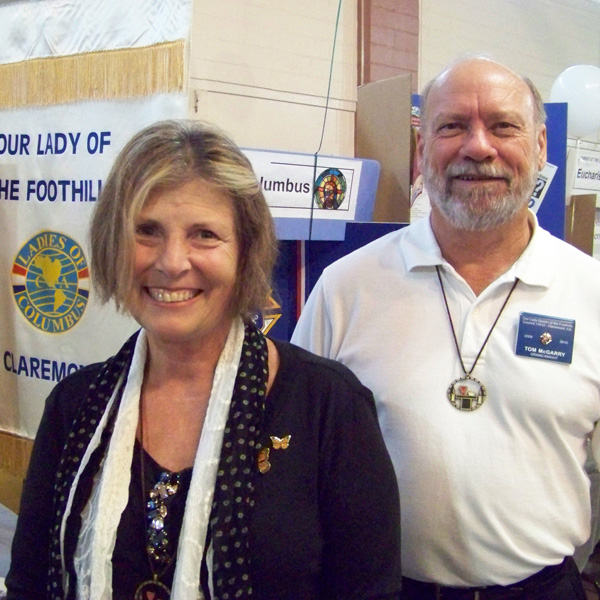 As the Lord loves a cheerful giver (2 Cor 9:7), the McGarry's never tire of giving back with a smile. Both enjoy serving as Pastoral Care Ministers to two local centers for assisted living, a Sunday morning activity that carries them into the heart of the Gospel message of the day. Before distributing Communion to the residents, they conduct a simple service that includes the reading of the Sunday Scriptures. "The people there are so grateful, that we thank them for the satisfaction and joy we receive from them, " says Tom. This couple also shepherded classes for parents and godparents preparing for a child's Baptism, tailoring their approach to meet the needs unique to each family and situation. They were equal to the challenge of keeping order among the lively gathering of adults, babies and toddlers, having raised three sons themselves. Their style is also versatile enough to acccommodate adult candidates for Christian Initiation in the RCIA program they support. Seemingly inseparable, they do diverge when it's time for Juline's night with the Fellowship of Catholic Christian Women, or Tom's warming up with the 9 a.m. Sunday Mass music ensemble. Juline has had an abiding interest in education since the days she taught Sunday school as a teen, and later as a substitute teacher at OLA School when her sons were students. Tom works as a project manager for heavy hauling/lifting and logistics on large construction projects. The two are reunited at events for the Knights and Ladies of Columbus where they are among the most active and appreciated members. Tom is a past Grand Knight. For ten years they were dedicated to the OLA Blood Drive with Juline at his side... both dressed in red to attract attention to a cause they passionately believe in.