Allow me to introduce myself. I am Fr. Gabriel Kang, and I begin my service at OLA as associate pastor on July 1. I look forward to meeting you!

I am coming to you from Saint Kateri Tekakwitha Catholic Church in Santa Clarita, my first assignment following ordination in 2015. While I was at Saint Kateri, I was involved in RCIA, Faith Formation, Liturgical Ministry, Legion of Mary, Knights of Columbus, and more.

My full name is Joo Wan Gabiel Kang, and I was born in Seoul, Korea.
I came to the United States in 2000 with my parents; my older brother still lives in Korea. My father and mother are traditional Korean musicians. who perform and teach Korean music in Los Angeles.

I have wanted to be a priest since I was five years old. My first impression of the Catholic Mass at that age was hearing loud music and watching the procession. Immediately I fell in love with the priest’s vestments and told my mother that I wanted to be a priest. That was the beginning of my priestly vocation! As a child I played Mass in front of my parents with an “oreo” and milk. It is really interesting how God can attract even little kids at their own level. Since then I have attended Sunday Mass regularly. I was baptized when I was 8 years old. As soon as I received my First Communion, I became an altar server and fell in love with the liturgy.

When I came to the States, I attended Horace Mann Middle School in Beverly Hills, and then Beverly Hills High School for two years. When I was junior in high school, I transferred to Daniel Murphy Catholic High School in Los Angeles and graduated in 2005.

After graduating from high school, I entered Juan Diego House to become a seminarian for the Archdiocese of Los Angeles. I attended El Camino City College, then transferred to Mount Angel Seminary in Oregon. There I received a bachelor's degree in Philosophy and Religious Studies. After finishing my B.A. program, I entered St. John’s Seminary where I studied Theology. For my pastoral year, I was assigned as an intern at St. Anthony’s Parish in San Gabriel. In 2014, I was ordained as a deacon and ministered at my home parish for five months. I received my Masters of Divinity from St. John’s in May 2015, and two weeks later, I was ordained a priest by Archbishop Jose Gomez.

From a young age, I fell in love with the Sacraments because through the Sacraments, I can be a part of others’ lives and walk with them on their faith journey. I have learned that through Baptism, I can be part of a child’s life. As a confessor, I can be a mediator between God and God’s people. Through Matrimony, I can share in the couple’s love. Through the Anointing of the Sick, I can be present at the last moment of one’s earthly life. All these sacramental experiences give me great happiness in my life. I look forward to sharing my happiness with all the parishioners here at Our Lady of the Assumption Parish. 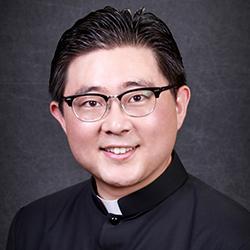